Mineral oil better insulating properties than air. it is this property of oil which prompted steinmetz to break current under oil. he immersed an ordinary knife switch in oil and investigated the breaking capacity of the arrangement. Reliability, simplicity of construction and relative cheapness are particular virtues of oil, however, has the following disadvantages:

1. It is inflammable and may cause fire hazards.
2. There is a possibility of its forming an explosive mixture with air.
3. because of the production of carbon particles in the oil due to heating, periodical reconditioning or replacement is required.

The following are the categories of oil circuit breakers

The first and second categories of breakers are also known as the dead tank construction   because the tank is held at earth potential whereas the third category is known as live tank as the   tank containing oil is insulated from the ground. 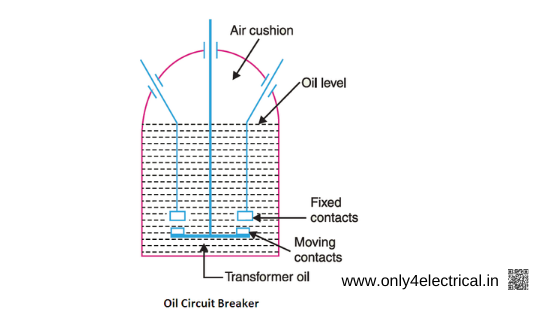 The circuit breaker consists of a metal tank containing oil and encloses two or more contacts
. since large energies are to be dissipated within the tank, a large gaseous pressure is developed. to withstand such a large pressure the tank has to be a strong one. it is usual to make the tank and the top plates either of welded sheet steel or boiler plates. the distance between phases and the clearances between the live metal and the earthed metal are a function of the operating voltage.

principle of operation:the plain-break principle involves the simple process of separating the current carrying contacts under oil with on special control over the resulting arc other than the increase in length caused by the moving contact. the final arc extinction is obtained when a certain critical gap between the contacts is reached, the length of which depends upon the arc current and the recovery voltage.

At the instant of contact separation an arc is established between them. Initially, the separation is very small and a high voltage gradient between the contacts ionizes the oil. the gas obtained from the oil is mainly hydrogen which cannot remain in molecular form and is dissociated in its atomic form releasing lots of heat. with this, the arc core attains a temperature of 5000'k. the mixture of gases occupies a volume about one thousand times that of the oil decomposed. the oil is, therefore, pushed away form the arc and an expanding gas bubble surrounds the arc region based on energy balance principle, final extinction of arc takes place at a current zero when the power input to the arc is less then that dissipated between the contacts.

form practical point of view the speed of the break should be as high as possible because a certain break distance has to be reached before interruption is likely to occur and the sooner this is achieved the smaller the energy released in the breaker and the less mechanically strong a breaker will have to be designed.
The double break arrangement as shown in Fig. 1.1 is perhaps the most familiar of all oil circuit breakers. the two breaks in series give rapid arc lengthening without the need for a specially fast contact speed, and the total gap distance at the end of stroke can conveniently be made ample. he vertical break also permits the use of a cylindrical oil tank requiring relatively low floor area. 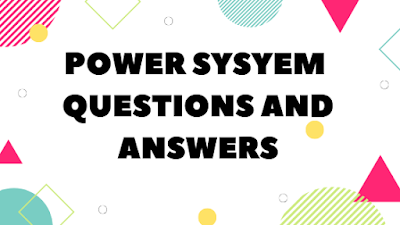 4).Consider the following statements:
pumped storage plants when operated in interconnected power systems serve to
a)    increase load factor of steam plant.
b)    provide added capacity to meet peak loads.
c)    decrease load factor of steam plant.
d)    provide added capacity to meet base loads.
which of the above statements are correct.
(a)1,2,3 and 4. (b)1 and 3 only.
(c)1 and 2 only. (d)3 and 4 only.

9).pump storage schemer are used to improve.
a)    the power factor. (b)the diversity factor.
c)    the load factor. (d)the quality of voltage.
e)    the reactive power capacity.
f)    the plant capacity factor as well as the load factor of the power system.

10).A hydel power plant of run-off-river type should be provided with pondage so that the.
a)    film capacity of the plant is increased.
b)    operating head is controlled.
c)    pressure inside the turbine casing remains constant.
d)    kinetic energy of the running water is fully utilized.

Answer: c)
The specific speed of the turbines is defined as the speed of a geometrically similar turbine that would develop one metric horse power under a head of one meter.

3).An impulse turbine.
a)    is most suited for low head and high discharge power plants.
b)    operates by initial complete conversion to kinetic energy.
c)    makes use of a draft tube.
d)    always operates submerged.

Answer: B) when the entire pressure of water is converted into kinetic energy in nozzle and the jet thus formed drives the wheel, the turbine is called impulse turbine.

7).In reaction turbine, the function of draft tube is to.
a)    reduce water hammer.
b)    increase flow rate of water.
c)    convert kinetic energy of water to potential energy by a gradual expansion in divergent pan.
d)    none of the above.

Answer: A)
propellar turbine are reaction turbine which is suitable for low head and large quantity of water. It is mainly suitable for heads below 30m

10).which of the following statements is/are correct, In pumped storage power plants.
a)    water is recirculated through water turbines.
b)    reversible turbines are used which operate as turbines for
power generation during peak load hours and as pumps for
pumping water during peak-off hours.

1).The function of a surge tank is to.
a)    supply water at constant pressure.
b)    relieve water hammer pressures in the penstock pipe.
c)    produce surge in the pipeline.
d)    none of the above.

3).In a medium or high head hydroelectric power station,a surge tank is provided to.
a)    reduce the length of the penstock pipes.
b)    augment water at the forebay.
c)    control the pressure variations in the pennstock pipes due to sudden load changes.
d)    control the water flow through the turbine.

5).The draft tube is provided to.
a)    raise the water surface of the stream to create an artificial head.
b)    reduce the effect of water hammer.
c)    increase the acting head on the water wheel.
d)    none of the above.

Answer: b)
Because of higher specific speed, The kaplan turbine is suitable for low head and it is always 30m

Answer: a)
kaplan is used for run of river and poundage station with head of up to 61m (low head ). This type has an a axial flow with variable pitch blades.